MJ Phoenix grew up near Liverpool, England, and became interested in music at an early age. He started playing guitar and bass as a teenager and played in – and managed and promoted – various bands in southern England.

After moving to the States, he joined funk ensemble The Secret (Charlottesville, VA) as bassist and co-songwriter. In DC, he played bass in cover band The Black Rails for a decade before forming Amulet with Stephanie Stryker.

MJ is the bassist in our live lineup and plays bass, guitar, keys, synthesizers, and sequencers on our recordings. He is a principal songwriter, along with Stephanie. He also works with her on video production and style concepts for our video and photo shoots. 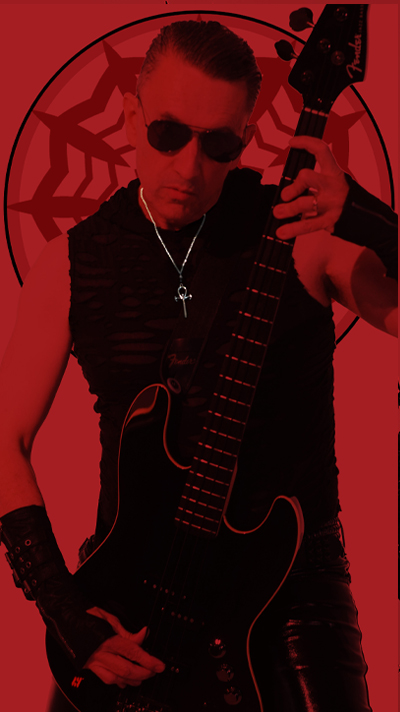 Stephanie Stryker is a Northern Virginia native and has Virginia ancestry back to Jamestown. Her mom and brother are professional musicians, but she never considered herself among them outside of being a karaoke DJ and a 6-month stint on saxophone in 7th grade. MJ took a chance on her and it seems like she can at least carry a tune.

A self-proclaimed goth girl since her teens, Stephanie enjoyed typical suburban mall goth activities like dyeing her hair black, moping around, and listening to loud, explicit music in her bedroom with green light bulbs glowing in a chandelier while drawing portraits of Marilyn Manson. Once she was old enough to go to the goth club, she began her relationship with real goth music and developed her love of electronic music in the form of EBM and various expressions of industrial dance music.

Stephanie has a degree in fashion design and daylights as a graphic designer. She has a deep love for fashion and makeup (her wardrobe is considered a family member). She is an illustrator, photographer, genealogist, pagan, vegan, budding video editor, and Mac nerd. She also loves happy hardcore, but don’t tell anybody. 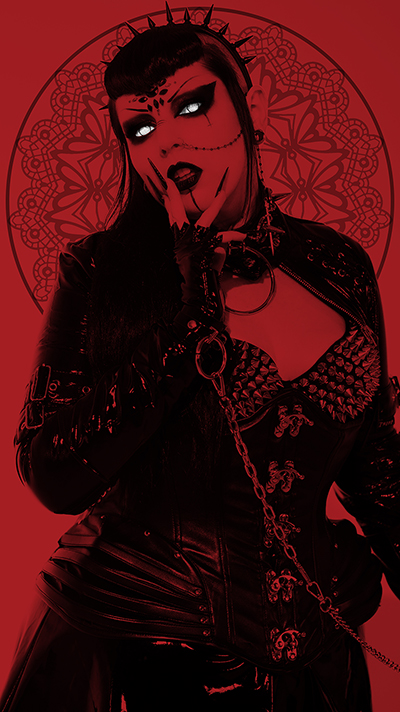 Bob Carr thinks he’s funnier than he is. If someone in the band is laughing, it’s usually a pity laugh for Bob.

He grew up in Groveton, VA where he was surrounded by a musical family who instilled his love of all musical things.

He started making music in his early teens playing bass and guitar wherever and in whatever genre he could find.

Prior to Amulet, he played stages all over the DMV as the guitarist-vocalist for M4TR. Bob is an avid audiobook starter, husband, father, and YouTube addict. 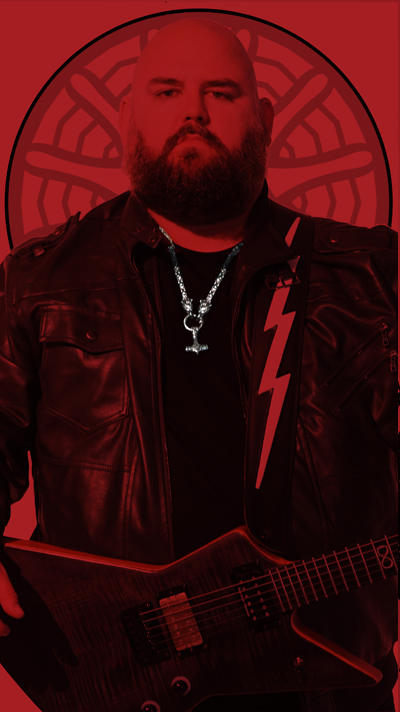 Alison Freyja’s upbringing was decidedly musical, participating for many years in melodious family activities at home. In her teens she began to appreciate the popular, keyboard-intensive music popularized in the 70’s and 80’s.

Along the way, she progressed to piano lessons, musical theater, and choral singing. She started experimenting with songwriting when she picked up the acoustic guitar in her mid-teens, and even penned some memorable songs she refers to as “her three greatest hits!”

In recent years she’s dived into playing and programming the synthesizer and is excited to have joined Amulet as part of the live implementation of the music. Besides playing delicious keyboard parts and samples she particularly enjoys contributing to vocal harmonies during performances.

Alison is a native Washingtonian who loves board gaming, hula hooping, and her hyperactive dog, Floyd. 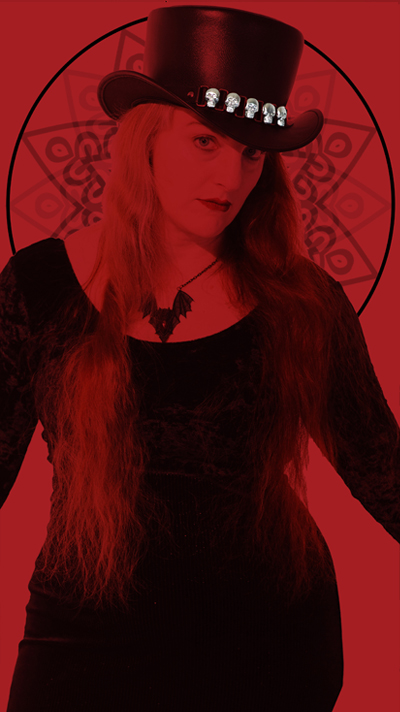 Thomas Grothe grew up in central Iowa and southeast Minnesota, and started playing drums when he was in 5th grade. He played in jazz band and drumline through highschool, a few bands during college, including an instrumental prog metal band called Portal, who released two albums. He also plays a bit of piano and dabbles in electronic music composition. Some of his top musical influences are Tool, Pink Floyd, Chiodos, Linkin Park, Led Zeppelin, Porcupine Tree, The Beatles, Miles Davis, Carbon Based Lifeforms, and Mastodon.

He has had a passion for computers ever since playing Chip’s Challenge on Windows 98 when he was very young, so he went to college at Iowa State University for computer engineering in 2014, then switched majors to horticulture the next year after becoming thoroughly interested in permaculture as a result of somewhat of an awakening regarding humanity’s ecological situation. Then he dropped out after realizing that the modern educational institutions seemed to be only exacerbating the problem, attempted some version of asceticism and worked at a burrito shop for half a year, then decided to go back to college for a degree in computer science after realizing he still had too many attachments to the material world to completely abandon the show.

After graduating in 2019, he began applying for jobs and eventually got an offer from a company in Manassas, VA to work on submarine software for the Navy. He moved to Virginia in January of 2020. After many months without playing any drums, he signed up for a practice slot at a rehearsal space in Falls Church. One day in the spring of 2021, he encountered a guy who was having trouble putting a key into the lockbox, who turned out to be MJ who was looking for a drummer for his band. 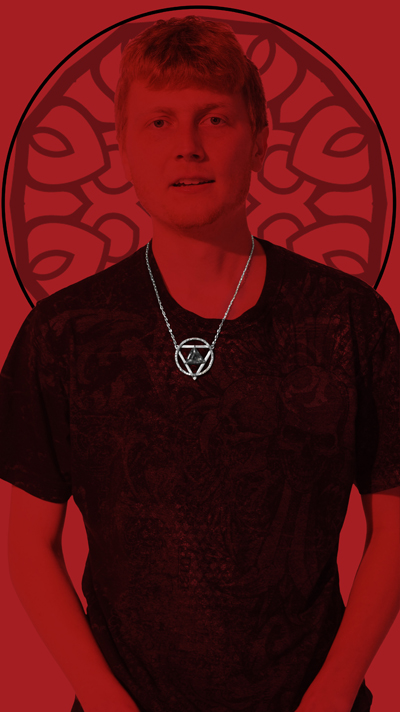 Damian Himeros grew up in the New York tri-state area and has had a robust affinity for loud classic rock music even at a rather early age, always twisting the radio dial clockwise when music from Deep Purple, Black Sabbath, Led Zeppelin, and the like was on. In his teens, he began dabbling in guitar and became more serious about it during his college years, practicing ‘til he had a guitar-shaped welt on his chest!

He’s played in various rock bands his whole adult life and has a predilection for heavy/intense music and pointy instruments! He was recruited into Amulet in the Spring of 2021 after the release of their first album and plays lead and rhythm parts in performing that material live; and will be a contributor to subsequent album material. His primary musical influences are Soundgarden, Jane’s Addiction, Rush, Dream Theater, Porcupine Tree, and Opeth. 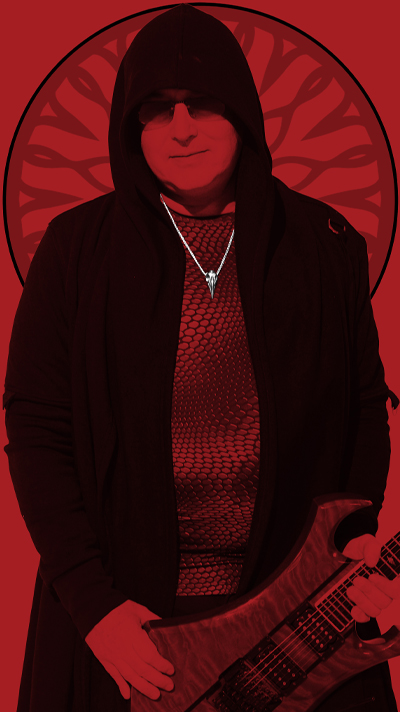